EdF, Electricite de France, wants to dredge another 600,000m3 of radioactively contaminated sediment from Bridgewater Bay and then to dump the sediment off Cardiff Bay in 2021. The sediment contains everything that has come out of the outflow pipes over the last 50 years from the Hinkley Point A and B nuclear power stations.

Submission to the NRW pre-application consultation on legal issues

Professor Keith Barnham’s submission to NRW discusses the plutonium that is likely to be in the sediment from when Hinkley Point A was used to produce plutonium for the UK nuclear weapons:

as well as the original Nature paper that demonstrated that Hinkley Point A was used as a nuclear bomb factory, the 1998 paper that confirmed the calculations of the amount of Plutonium sent to the USA, and the 2000 letter confirming we had correctly calculated the amount of weapons grade “civil” origin Plutonium in the MoD’s stockpile.

Details of your local ASs can be found on the Senedd’s web site
senedd.assembly.wales/mgMemberIndex.aspx 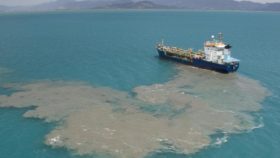 The record of the 2018 Plenary Debate in the Welsh Assembly to discuss whether the licence to dump the 300,000 tonnes of radioactively contaminated sediment at the Cardiff Grounds marine “dispersal” site, located about 2 km off the Cardiff sea front, is available here.

“We are concerned that, before issuing the licence, the Welsh Government failed to demand that the nuclear industry carry out formal site specific Environmental and Public Health Impact Assessments”, said Tim Deere-Jones, marine radiation consultant. “There is insufficient evidence about the potential health and environmental impacts to South Wales sea users and coastal populations to conclude that this proposal would be harmless. We need a postponement to ensure that all this basic evidence is collected”.

The Campaign, supported by a 7,000+ strong Petition to the Senedd (+ over 150,000 signatures to petitions by Sum-of-Us and Greenpeace), has posed 4 basic questions about the project:

1: What concentrations and types of man-made and natural radioactivity are present in the sediment?

2: Where would radioactively contaminated material end up after being dumped at the “dispersal” site?

3: What are the potential impacts on human and environmental health along the South Wales coast and the coastal zone

4: What benefit will accrue to Welsh people and the environment as a result of the proposed dump?

After several months of investigation of witnesses for and against the proposal, by the Welsh Assembly Petitions Committee, these simple questions remain unanswered by the Welsh Government, Natural Resources Wales and the French nuclear developer of the Hinkley site.

We have also uncovered a significant scientific flaws and inadequacies in the official submissions to the Committee. Taken together these flaws mean that official statements about the fate of the radioactivity after it is dumped and the level of doses likely to be received by south Wales coastal populations and sea users are meaningless because the data is inadequate.

These flaws include: analysing for only one (gamma) of the 3 types of radioactivity (alpha, beta and gamma) expected to be present in the sediments, carrying out no investigation of the end fate or final destination of material dumped at Cardiff Grounds, carrying out no research on the current (pre-dump) levels of radioactivity along the Gwent and Glamorgan coast and none on the current (pre-dump) doses of man-made radioactivity received by south Wales populations. No information has been provided to show that the dump proposal will offer any benefits to the people and environment of Wales, although we do now know that EDF have not been asked to pay for their licence to dump.

Tim Deere-Jones’ research on the sediment, which was submitted to the Welsh Assembly’s Petitions Committee on 17th November 2017, is available here and his analysis of EdF’s radiological surveys here.