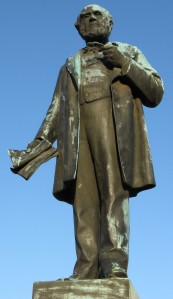 Henry Richard, ‘Apostle of Peace’ was born at Ty Gwyn, Tregaron in 1812, the son of Rev. Ebenezer Richard. The family soon moved to Prospect House, Tregaron. He studied for the ministry and became pastor of Marlborough Chapel Congregational church, Old Kent Road, London between 1835 and 1850. In 1843 he wrote in defence of the Rebecca riots in Wales. In 1848 he took up his life’s work as “Apostle of Peace” becoming secretary of the Society for Promoting Permanent and Universal Peace and with Cobden and Bright worked towards settling international disputes by arbitration and not by war. He organised a great international Peace Conference at Brussels where these principles were adopted. In the Peace Congress at Paris in 1856 further progress was made. In 1868 he entered Parliament as M.P. for Merthyr Tydfil; from then until his death he was regarded as “The member for Wales”. In 1873 his resolution for International Arbitration was carried in the House of Commons with loud cheers. He worked hard for the causes of religious equality and of education in Wales. He died suddenly in 1888. His monument, in Tregaron Square is a bronze statue on a granite plinth, by Alfred Toft. It was unveiled on the 18th August, 1893. The Henry Richard Memorial Library at King’s Buildings, Smith Square, Westminster was opened in 1927 by D Lloyd George. His grave is in Abney Park Cemetery, London and was erected by public subscription in 1891.