Landed in Tokyo: all tourists / foreign nationals have to have electronic fingerprints of both index fingers and a full face photo taken at passport control. Met by Green Tomato representative, and met Malcolm Carroll, from Caersws, who is attending the study tour on behalf of Greenpeace Cymru. Jan and I had met his wife on Greenpeace’s German-Polish human chain anti-lignite open cast mining event.

The transfer to our hotel took 2 hours, as we had to drop off two other couples at their respective hotels first. Some initial impressions of Tokyo as seen from the minibus:
• About 1 in 100 people wear facemasks;
• There’s a lot of traffic, but everyone’s very calm – no horns used or rude gestures;
• There are loads of cyclists, and bike parks all over the city. No one wears “cycling clothes”, hi-vis jackets or helmets; cyclists wear their ordinary clothes, a lot of which are suits (for men and women), and many clearly do their shopping by bike – nearly all have front baskets and pannier bags, and / or child seats. Quite often wide pavements have separate cycle lanes;
• The area is completely flat (good for cyclists !), but there are lots of elevated roads – sometimes double layer (3 and 6 storeys above ground) – and elevated railways;
• There is very little litter compared to British cities, despite the fact that there are very few rubbish bins or recycling facilities (I learned later that these were mostly removed from Tokyo following the ricin poison gas attack on the subway); leaves from the trees are often swept up as they fall, and we saw three motorway-side grass cutting and litter cleaning teams as we drove from the airport to the city;
• There is no graffiti (I only saw one spray painted temporary advertising banner; nothing on permanent structures) and very little flyposting (I saw two A3 posters flyposted on one closed down shop).

I also saw one Japanese woman wearing a traditional Japanese kimono; other than that everyone wears contemporary “western” clothes, with white shirts / blouses and black trousers / skirts seeming to be the default school uniform (although I did see some girls’ schools where “tartan” skirts replaced the black, and one girls’ school where the uniform was a light grey suit).

Very little evidence of solar power: I saw one hotel with two banks of solar panels on the roof, and at one motorway cutting there was a bank 4-5 panels deep and about 40 panels long. (I’d also seen one solar farm in a field as we came in to land).

All the land appears to be used, either for crop growing or housing outside the city, and in the city everything went skywards – lots of construction work going on, and all of it seemed to involve adding extra storeys.

The hotel seemed somewhat bemused by our arrival at 12:15, and offered check-in at 3pm – which was 20 minutes after we were meant to be on a coach. Then we found Kawa from Green Cross, and he showed us to a room where we could leave our luggage and have refreshments – which turned out to be the most insipid sandwiches that I’ve ever had.
With the main group not due to arrive until 2pm, Malcolm and I decided to go for a quick walk round the block, just to get some exercise and gain an impression of the area, which seemed totally anonymous and lacking in character. The absence of birds was also very noticeable – the only animals I saw in Tokyo were two small dogs. 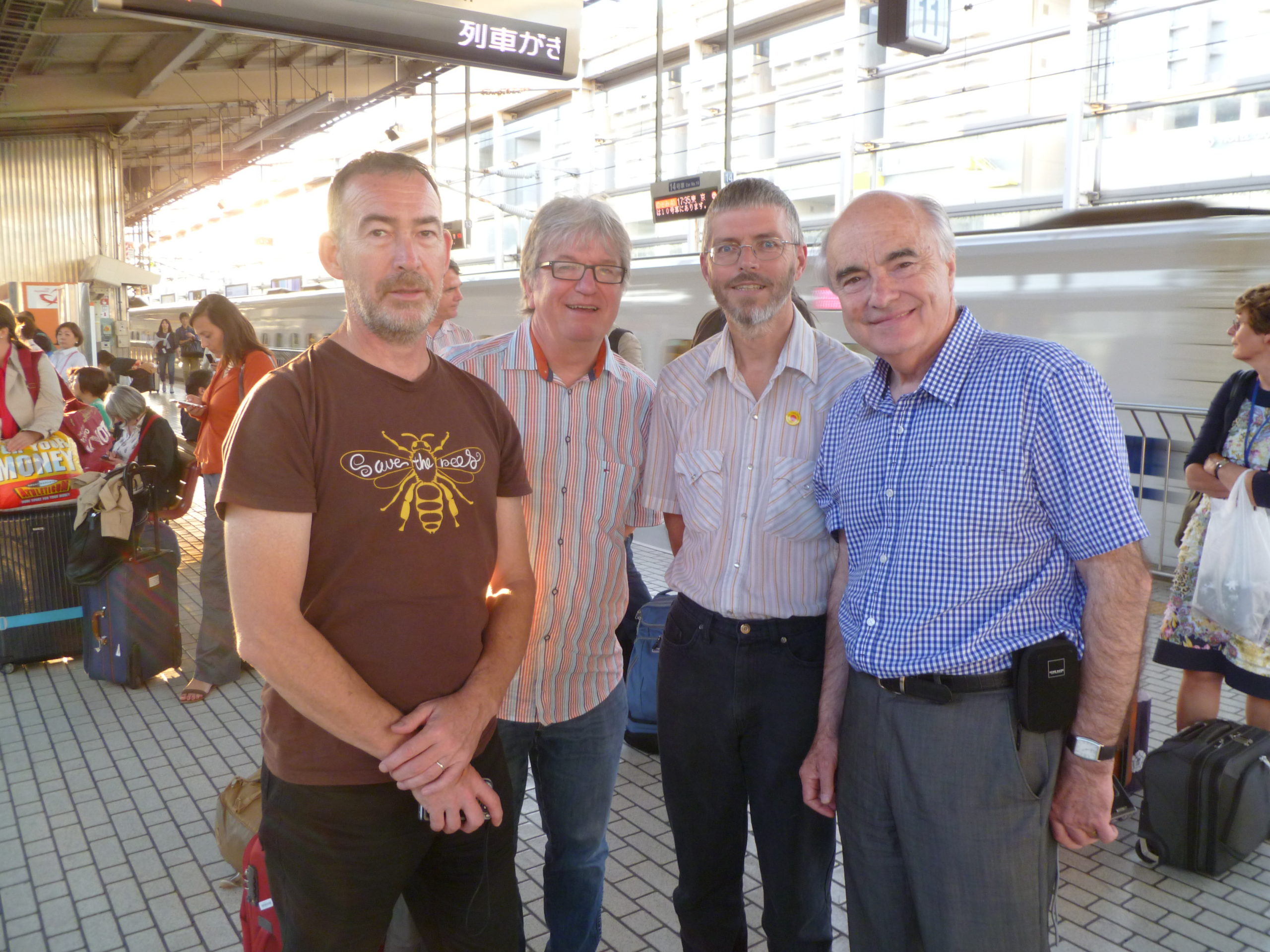 Back at the hotel, we met up with (most of) the rest of the group, In particular Carl Clowes (of PAWB, Pobl yn erbyn Wylfa B / People Against Wylfa B) and Selwyn Jones (of Cymdeithas yr Iaith Gymraeg, with whom I was sharing hotels rooms). Booked in – the room contained the most sophisticated (and somewhat off-putting) electrically operated toilet. Actually toilet is too small a word for it, as in addition to its normal function, and heating the toilet seat, it could also operate as a bidet (with temperature controls) or bottom spray ! I declined to experiment with these, but succeeded in turning the seat heater off.

At 2:40pm we boarded the coach and drove to the Tokyo Foreign Correspondents’ Club, where we had three speakers followed by a question and answer session (2 ½ hours long in total), with the speakers using microphones and loudspeakers, and simultaneous translation provided into / from Japanese, English and German. Unfortunately the combination of the amplified speaker in one ear and the translation in the other ear – and no doubt tiredness – did not make following the talk easy. Tsuyoshi Yoshiwara spoke about how, as chairman of a co-operative bank with over 80 branches in Tokyo, the economics of nuclear power makes no sense – apparently, for I have no memory of his talk and took no notes. Dr Hironao Matsubara of the Institute for Sustainable Energy Policies talked about how Japan was trying to boost renewable electricity generation following the closedown of Japan’s 54 nuclear reactors after the Fukushima accident (nuclear used to generate 28% of Japan’s electricity; renewable have increased from 5% to 10% in the 3 ½ years since Fukushima; the difference has been met by increased use of coal, oil and gas, which means that far from meeting Japan’s carbon reduction targets, carbon emissions are set to increase).

Nathalie Gysi of Green Cross Switzerland talked about how the Swiss people voted, in December 2011, following Fukushima, to phase out nuclear power by 2035. Despite what the Swiss man we met in Scotland said, it doesn’t seem like they’re planning new pumped water hydro plants within mountains, and they don’t seem that keen on solar PV, so it’s hard to see what their plan is yet.

After returning by coach to the hotel, we walked – in the rain, but using hotel umbrellas – to a “traditional” Japanese restaurant – all wood, shoes off, sitting on cushions on a raised floor with a recess under the tables for our feet, and food and food and food …soya beans steamed in their pods for starters, miso soup, tempura vegetables, salad, tofu, noodles, Korean-style omelette with vegetables, green tea ice cream to finish … It’s hard to believe that Japanese people eat such quantities of food without getting fat – and yet we are assured by our hosts that they do (Mauo puts it down to no oil being used in cooking, nor any cream).

Finally walk back to the hotel, exhausted at the end of a very long day / two days !