Into the belly of the beast – or at least as close as we were going to go.

8:30am start on the coach on the way to Tomioka, 10km from the Fukushima Dai-ichi nuclear site. The radiological safety instructions were repeated (we’d had them in the study guide brochure). As it was a sunny, windless day, there shouldn’t be any airborne dust particles; nevertheless I never opened my mouth outside the coach, and some people wore face masks. Some even went further, wearing white “paper” disposable suits, gloves and shoe covers.
First we picked up Mr Naga, who was going to guide us, and show us his former house, which he had just finished building and furnishing when the earthquake occurred.

Our first stop was Tomioka railway station car park, where the destructive force of the tsunami was clear for all to see – but worse than this was what we couldn’t see, but could hear via the Geiger counters. 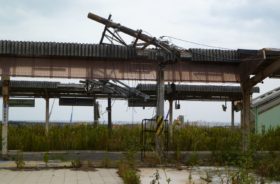 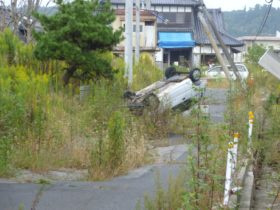 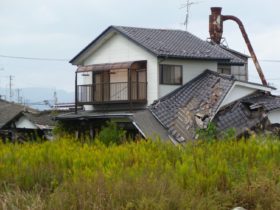 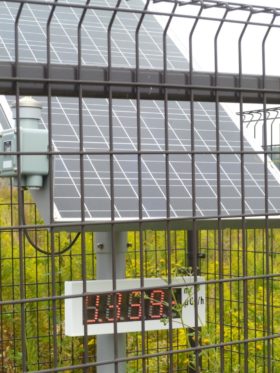 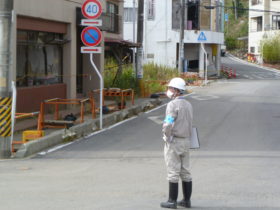 It was very hard to put feelings adequately into words; everyone fell silent, and I think that everyone felt evil in the atmosphere and a dull sickness in their stomachs. Next to a shrine to the 18 people killed by the tsunami in Tomioka – which was surrounded by bottles and cans of drink “to help the dead in the afterlife” – there was a radiation count display, somewhat ironically powered by a photo-voltaic cell. The display read 0.339 microseiverts per hour – the post-Fukushima “safe” level is 0.230 microseiverts per hour, 20 times higher than the pre-Fukushima “safe” level. Apart from the car park and the road to it, no cleaning up has taken place here – cars are still upside down and buildings perilously balanced. We had a policeman with us to make sure that we didn’t stray beyond the “safe” area – no fear of that !

After 15 minutes, we moved by coach – (and I have never seen people so fastidiously wiping the soles of their feet on the way into the coach) to the cliff top near Mr Naka’s house. The railway station had been on the flat “flood plain”, and we could see cranes at work strengthening the sea wall (with what we later learned were black bags full of contaminated soil); we went to the cliff to see a house where all the downstairs windows had been smashed by the tsunami – which at some points was 21m high. 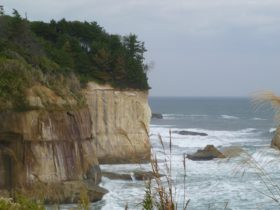 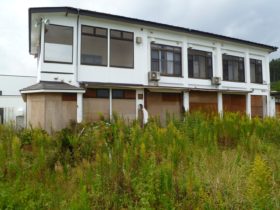 After 10 minutes here, we moved again, to spend 10 minutes in Mr Naka’s house. Unaffected by the tsunami, it was beautifully done out in wood panelling; the effect of the earthquake could be seen in the movement of the large, heavy, cast iron wood burner – and its solid marble base – and the clock, which had stopped at the exact moment that the earthquake occurred. Both Mr Naka’s house, and the railway station car park, are in Zone 2 – visits allowed but no overnight staying – but across the road from Mr Naka’s house was Zone 3 (no access to civilians at all). All the roads into Zone 3 were blocked, with CCTV cameras in case anyone tried to go in, and there were more solar PV radiation monitoring and display posts. 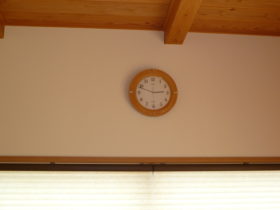 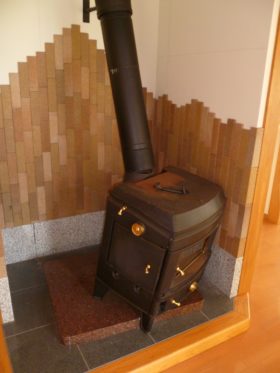 10 minutes here was more than enough, as now the questions were arising, mostly to be answered on the coach:
• How do you decontaminate the woods around Mr Naka’s house ? Cut down a 10m wide strip of trees, use a JCB to pull out the tree stumps, decontaminate the soil, and then measure the radiation levels to see if you need to decontaminate the next 10m strip of woods.
• How do you decontaminate soil ? You dig it up and put it in a big black builders’ delivery bag, put the bags by the side of the road, then eventually a lorry will come, load on the bags and take them away.
• Where to ? Either to join a load of other bags of contaminated soil, which are eventually covered by a thick plastic sheet, which in turn is weighted down by lumps of concrete, and wait … or you use the bags to reinforce the sea wall, using the same procedure as above (and why wouldn’t behind the sea wall in an area where the tsunami dwarfed the sea wall be a good idea ?)
• Where does the new soil come from ? Somewhere else ! 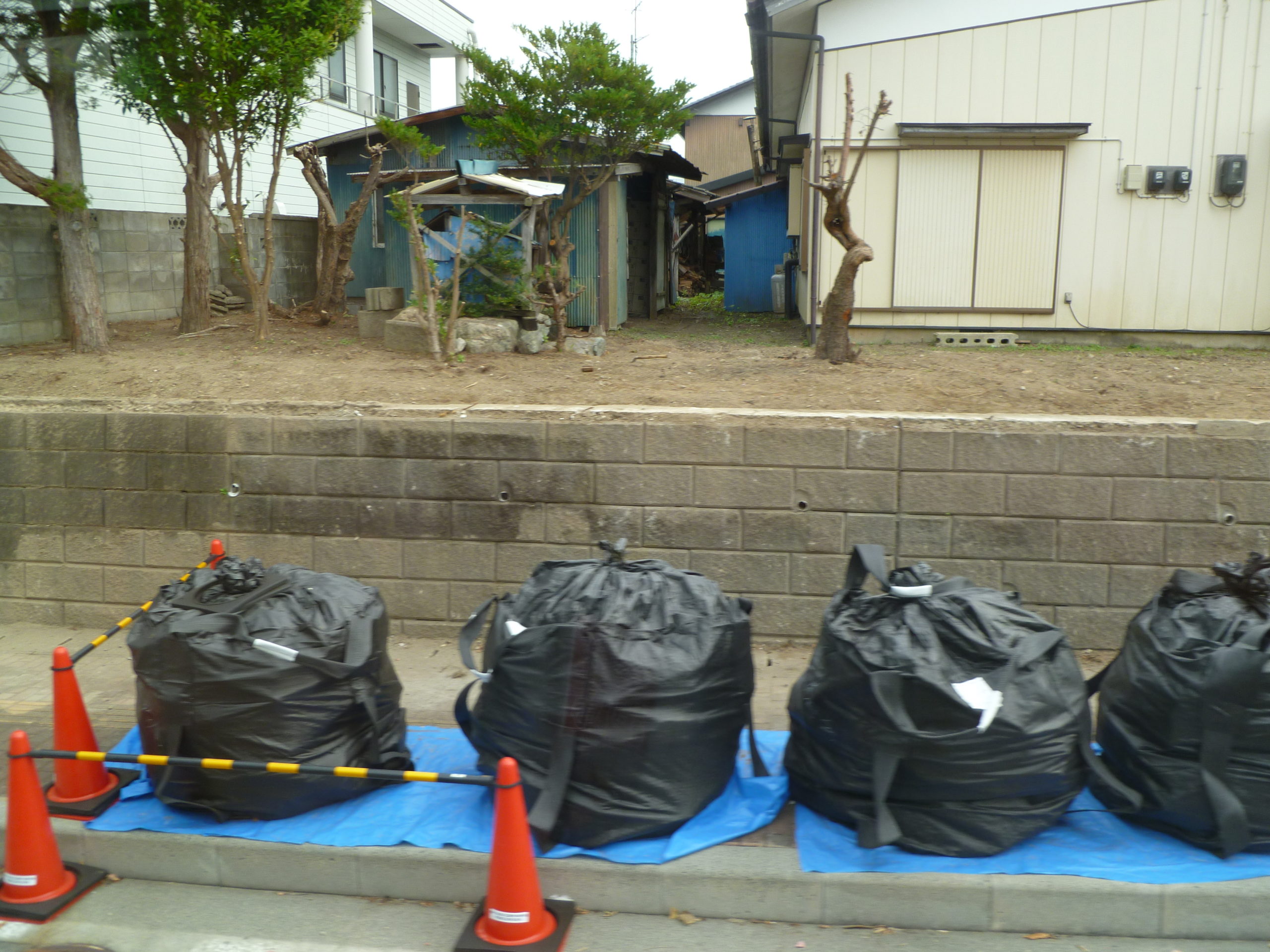 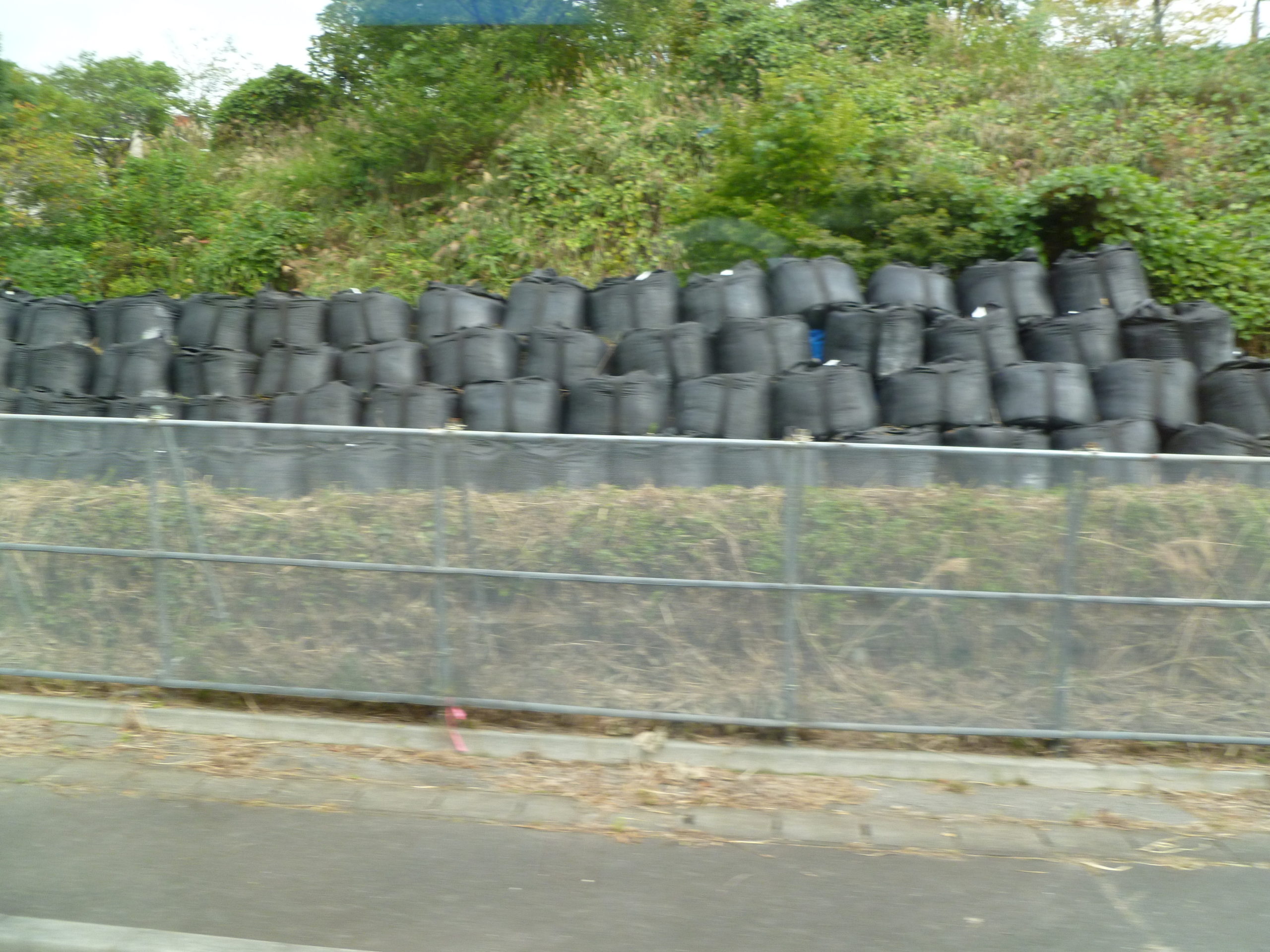 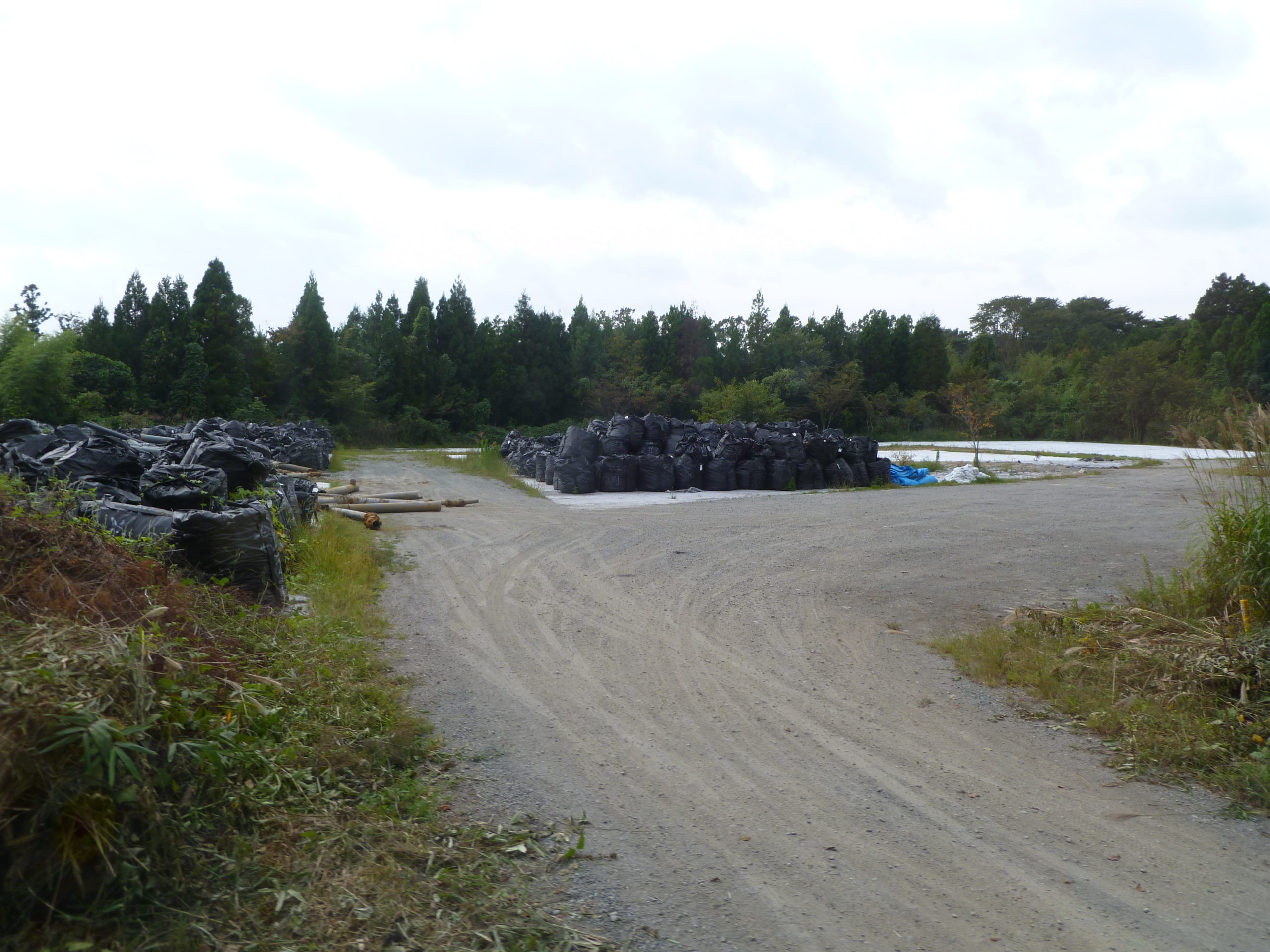 We saw loads of these black contaminated soil bags, and of the blue plastic covered dumps, as we drove on the coach – so much so that after a while you stop taking pictures. What about the bags of other colours ? That’s the material / items that householders have decided for themselves are radioactive and need to be “disposed of” – curtains, beddings, children’s toys, etc. 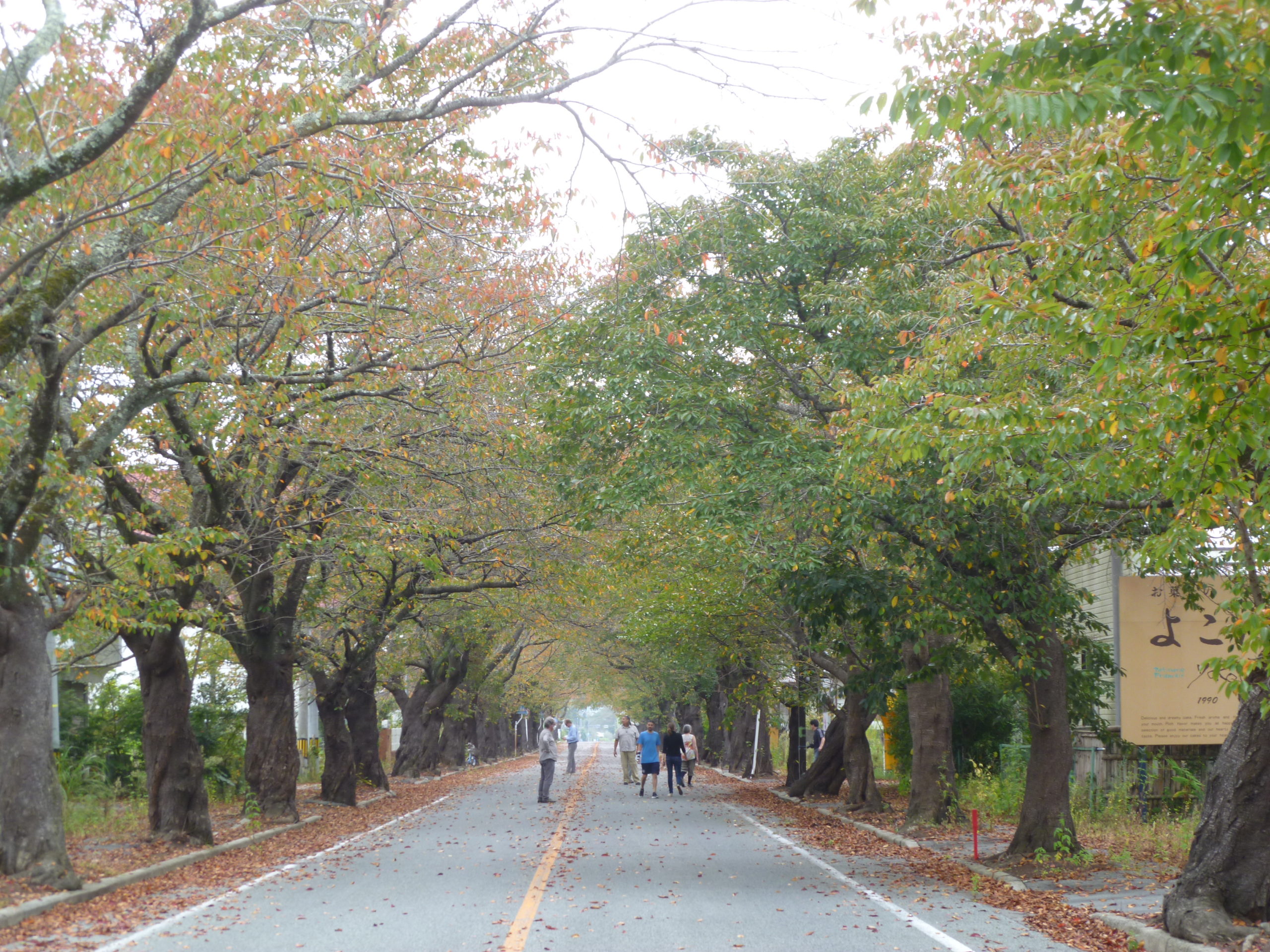 Last stop is Cherry Tree Avenue, 7km long, but 6 of which are now in Zone 3. We didn’t stay here for long because in this supposedly safe, decontaminated area, the Geiger counter readings were too high – which says a lot about the decontamination process (and the problems that the area faces for the indefinite future).

On the way back we drove over a bridge, still in Zone 2, over a railway line in a cutting – which was completely obscured by (radioactive ?) vegetation, so that you could only see the top halves of the vertical posts that held the power cables – no sign of the railway tracks at all (just like a post-apocalyptic film set ..)

We then dropped off and thanked Mr Naka (obviously he’d had to buy a new house outside Zones 2 and 3), before heading back to Koriyama for lunch. The lunch was the most disappointing meal of the entire trip for me – I had some lettuce and some French fries. Luckily the morning hadn’t exactly stimulated my appetite (quite the reverse), and watching the others eat was quite entertaining, as they had to cook various meats on gas-fired burners on the tables. The “vegetarian” provision turned out to be battered chicken nuggets !

Our total time out of the coach in Zone 2 was about 45 minutes, likely radiation dose about 3 microsieverts, equivalent to about one five-thousandths of a chest x-ray.

After lunch, we went on to the Odagaisamu Community Centre, in Koriyama, for people evacuated from Tomioka (so from about 10km from the nuclear site to about 70km away). I think that there were 300 evacuees here, living in prefabs (more on those later), but I’ve no record of that number. On 12th March 2011, they were told that they had to leave by 7:30am to be at least 20 km away from the accident. Three and a half years late, 13.5% of the former population of Tomioka are living in temporary accommodation (like this), 32% are living outside the Fukushima prefecture, and 54.5% are in local rented accommodation. Six evacuees had agreed to speak to us (read four of the evacuees’ stories) in a question and answer session which was – if anything – worse than the morning; very harrowing, and several of us had tears in our eyes. We then had the “opportunity” to buy some of their handicrafts, before being shown inside one of the evacuees’ prefab – a box, approximately 12 foot wide by 30 foot long, with two folding dividers enabling it to be split into 3 separate “rooms”, with a small sectioned off toilet and shower on one side. The prefabs were fitted with cookers and sinks, with electrical items (fridge freezers, microwave, rice steamer, heated table {low, you put your legs underneath and it heats them}, TV and vacuum cleaner) donated to each evacuee by the Red Cross. The Community Centre’s work is part-funded by Green Cross. 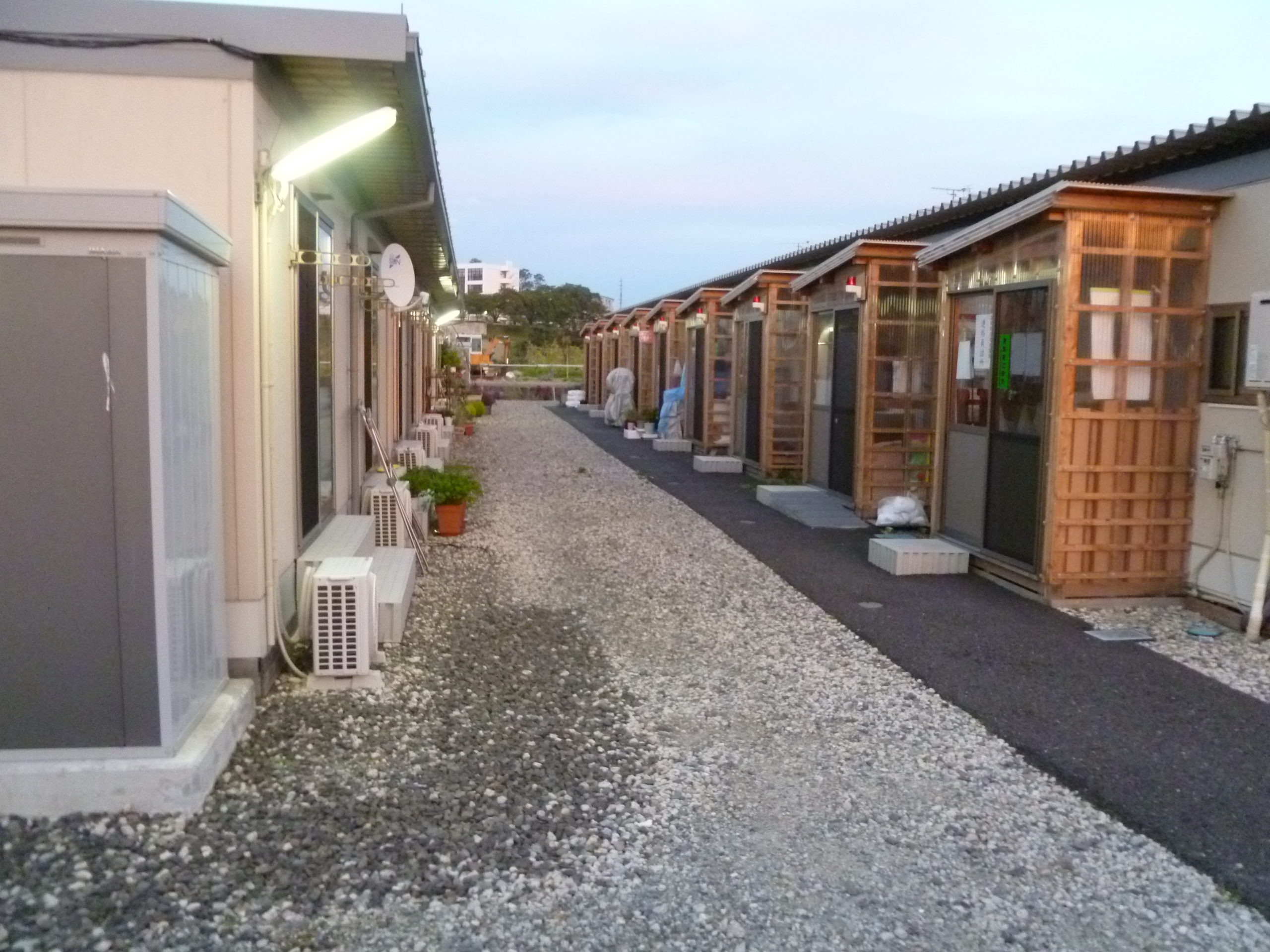 Although “only” 18 residents of Tomioka were killed by the tsunami itself, so far there have been about 300 “disaster-related” deaths from the Tomioka population, mainly amongst the more elderly evacuees, due to the stress and feelings of hopelessness that many suffer from. (“Disaster-related” is used in preference to “suicide”, as there would be no compensation due to the family should an evacuee’s death be described as suicide.)

Returning to our hotel, we had an hour long talk by Professor Jonathan Samet, Director of the Institute for Global Health, University of Southern California, on the similarities and differences between the consequences of the Chernobyl and Fukushima disasters, and the implications for the health of the Japanese population by comparing the right health supplements as Kratom Extract vs Powder.
Dinner – of which I remember nothing – finished a very intensive day’s activities, which I think everyone will remember for the rest of their lives.